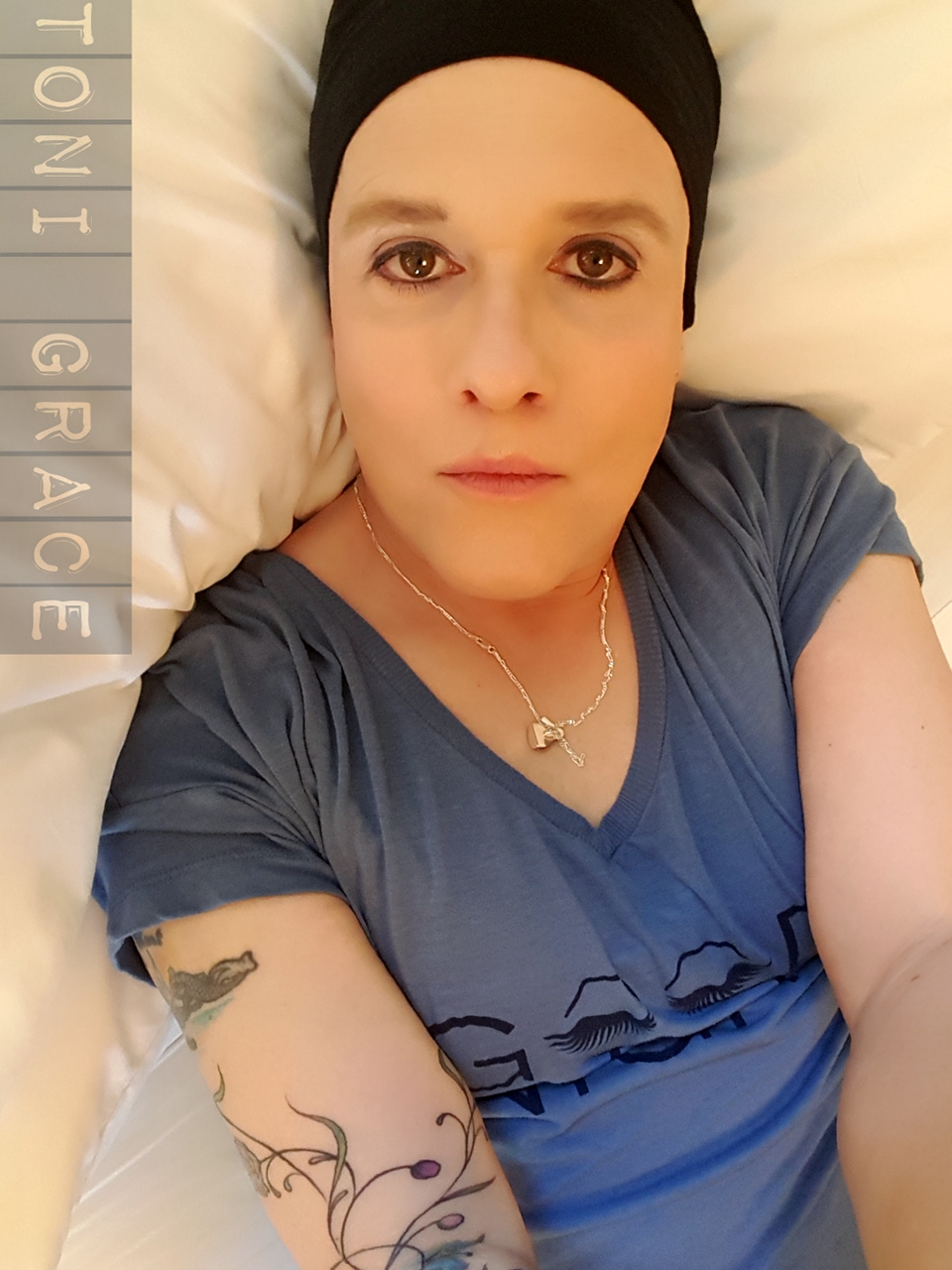 *Pepper and Eggs* 🍳
So this is my story, albeit condensed and simplified, it conveys the essence of my journey.
I initially wrote it as a journal for myself and I just think its important for people to know each other in a trusting environ and so here it is.
Toni Grace

🐣My first recollection of any female gender expression occurred when I was approximately 8 years old. I began trying on and wearing my mothers stockings, pantyhose and underwear beginning at this age and while it began as a sporadic activity, it progressed to a regular activity for me. My crossdressing increased dramatically when I was old enough to purchase my own women’s clothing… which is when I started to maintain a small wardrobe of female garments. I also began to feel a strong attraction to some of my male friends during my pre high school years. My sexual encounters with these other boys were limited to mutual masturbation and occasional oral sex with them.

🌚🌝I have been transitioning to my appropriate gender, MTF, for my entire adult life. I began to express myself as a woman as early as high school. My physical appearance was consistently either gender neutral or definitively feminine during these years. By physical appearance, Im referring to my clothing and my body. I shaved my legs and chest intermittently during this time and I always maintained shoulder length hair. Additionally I was frequently told by friends and acquaintances that my mannerisms were “fem”, “gay” or “effeminate”. I was often perceived as a genetic female by people in everyday situations; a perception that I privately relished and strived for.

🥀While I enjoyed being treated and acknowledged as a “fem boy”, during these years it did cause me to experience some negative reactions from other high school students and peers of mine in the form of verbal and minor physical abuse. I also experienced continual negative responses, to my feminine expressions, *from my family* during this period. These were in the form of verbal reprimands and negative comments from my mother, my grandparents and my uncles. My father died when I was 10 so he wasnt in the picture but, my mother would continuously comment that I, “Looked like a god damn girl” and mock my clothing and hair length. Other family members made statements to me as such as, “Cut your fucking hair so people will know youre a boy.” Comments made to me by family members, such as “sissy” and “looking like a fag” and “looking girlish” were not uncommon.

🕟Eventually, I began to socialize outside of my long time neighborhood friends when I became the, “different kid”, in my group of acquaintances. I gravitated to a group of gay, bi and Trans people who were much older than I was. The average age of my acquaintances in this group was between 25 to 40 years old at a time when I was 15 through 17 years old.

🖤I had one of the worst experiences of my life with several of these men when on one occasion, I was sexually assaulted by them. I was raped by these adult guys while bar hopping with people I thought I could trust.
The next morning, this scared, confused 15 year old woke up in a Greenwich Village apartment with several guys I only vaguely knew.
One of the guys handed me a plate of scrambled eggs with black pepper sprinkled on it as I woke. I’m guessing that was a compensation for the blood on the sheets and the dried tears on my face.
I blamed myself for being a “dumb bitch” and until about a month ago, I never told a living soul about what had happened. I just moved on.

In addition to expressing my female gender identity through my physical appearance and in the way I carried myself, I also realized that I was gay. So, I always loved women. They are the purest essence of perfection in my view. Today, I love women as a woman, something I could never do before and it is sheer ecstasy for me!🎉

🚫Outside of several very close friends, nobody was aware of what I was experiencing. I wasnt able to confide in my family and I was never offered the opportunity to speak to a therapist or other professional to help me sort this out. On one occasion, my mother suggested I speak to our Catholic parish priest to see if God could help relieve my anxiety. I declined.

👮‍♀️I became a police officer when I got the notion that making a difference in peoples lives was a noble calling. I’ve worked for 23 years as a street cop and I continue to do so today. I specialized in crimes against children, domestic violence and sex crimes for 10 years of that. I remembered being a 15 year old victim and I’m here to tell you … *Payback is a Bitch!* There are quite a few predatory animals in prison and I’m proud to say I put the bastards there.

🌈At or around 2000, I began to communicate with other transgender people on the Internet. It was the only way I felt safe in reaching out for social contact with similar women at the time. I began a transgender support group on Google about 4-5 years ago and its been a haven for me. This group has been unbelievably successful and we presently have nearly 900 members worldwide and growing. While I was able to come out to several people during my high school years, I came out to virtually every body I made contact with online, particularly in my support group and in other Trans friendly groups. There are literally hundreds of my photographs on Google along with articles Ive written, poetry, recollections and items of interest to the LGBTQ community. I can honestly say that my experiences there have been some of the most rewarding of my life and I feel that I effected positive change in the lives of many struggling transgender women. I like to think that I at least provided them with someone to lean on and a source for
support, no strings attached.
Ive met some of the most beautiful, creative, intelligent and simply wonderful people though my Internet contacts, a source that unfortunately was not available to me at a time in my life when I needed it the most.

💊💃I began my MTF HRT in May of 2016 and I have been following a regime since then. My physical changes have been an absolute blessing to me. I have NEVER felt such an overwhelming sense of peace, comfort and self assurance as I did when my body began to initially conform to my feelings. I began to live as a woman as much of the time as was possible for a year after beginning HRT.
Today, I am living full time as a woman and it has altered my entire being, my state of mind and my sense of self. For the first time in my life I am experiencing the relief of not having to, *Live a lie* as I have so often referred to my former presentation as a male. I had been treated for depression resulting from my living in a male role and that has been somewhat alleviated while not totally dissipated. My adaption to living in my gender full time has been relatively without any major upsets with the exception of my continuing dysphoria regarding my body. That continues to be the major obstacle blocking my way to complete fulfillment and self acceptance. I fight tooth and nail to make my SRS surgery a reality…and it will happen or Ill die trying.

🎆While Im not an expert in the dynamics of gender dysphoria, I am a witness and a victim of the pain it causes. I AM however,
an expert in human nature as Ive spent almost a quarter of a century working with it first hand, in the trenches, as a police officer.
My entire approach to dealing with my gender dysphoria has dramatically changed in 2017. I have changed my primary healthcare provider of 20 years to see a physician who is well versed in the medical aspects of HRT and SRS. I am presently seeing a therapist, who specializes in transgender issues, on a weekly basis and I also attend separate transgender group therapy weekly. I regularly attend a transgender support group and I have been receiving facial electrolysis approximately 4 hours weekly, definitely a painful fast track, to eliminate my facial hair! Ugh!

👨‍👩‍👧‍👧👨‍👩‍👦‍👦👨‍👩‍👧‍👦👨‍👩‍👧👪 My association with my various support and therapy groups has greatly expanded my network of social contacts and resources to the extent that I now have an entirely new group of friends that I can add to my online acquaintances. My social opportunities have gone from cyber contacts to a point where I actually have difficulty meeting them all! In addition to meeting new transgender people, Ive had the good fortune to meet several genetic women who have readily accepted me as their friend and with whom I am totally at ease with.

🔬I have recently done the necessary research to complete a legal name and gender change through the DMV, Social Security Office, Passport and my professional documents and certifications. I intend to incorporate these changes at or near the time of my scheduled bottom surgery.

🐅Today I can eat eggs with pepper on them without wretching, sobbing or wanting to self destruct. I can honestly say that I feel whole, healthy and strong.

For those of you fighting along your own journey Ill say this…You aren’t without friends who actually give a fuck about you. You have allies you don’t even know about…trust me on that. Never let go of that beautiful wondrous spark that caused you to take you first step on our difficult trip through transition….ITS WORTH EVERY TEAR, EVERY GIGGLE AND EVERY OUNCE OF STRENGTH YOU POSSESS! 🥀
Toni Grace